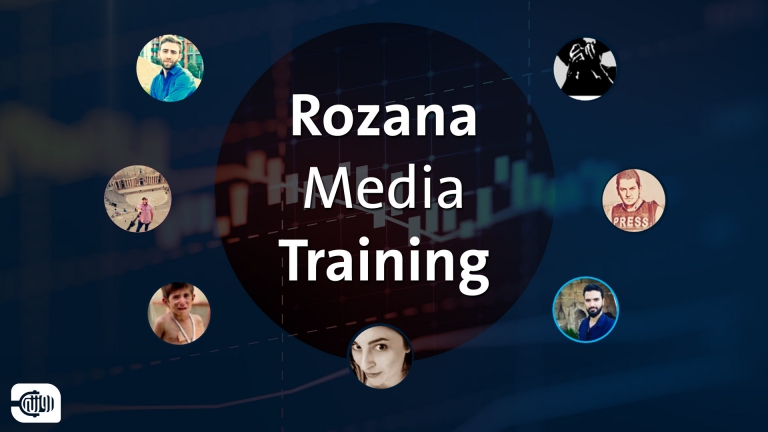 Last may, the training centre of Rozana Media Foundation organized training workshops for dozens of citizen journalists within Syria, under the supervision of professional journalists from several Syrian media outlets.

The topics covered by the training ranged from the fundamentals of press editing, news industry, to other types of press productions, in addition to television reports, data journalism, and press photography.

The workshops also focused on investigative journalism standards, journalistic ethics, digital safety and data protection. All the exercises were conducted online, except for one workshop held in Azaz, north of Aleppo.

47 trainees have participated in nine online trainings, under the supervision of nine trainers and with an average of 15 training discussions per session.

The Pedagogical Coordinator, Mohammed al-Hani, told Rozana that “the training started on May 3, which coincided with World Press Freedom Day. The coincidence was intended to deepen the training effort reinforced by basic journalistic values, especially freedom in Syria, which is considered as one of the most dangerous countries for journalists in the world”.

In February, trainers at the workshops completed a training course for trainers (TOT) organized by Syria Media School at Rozana Foundation’s headquarters in Gaziantep, southern Turkey.

Owaies Akkad, one of the trainers, stated to Rozana that, “a number of obstacles have been overcome, including the weakness of the Internet connexion in Syria and the lack of equipment”. Akkad added that the training was a personal challenge for each trainee to develop his/her own skills and deliver good quality reports.

The online training follows the first part of the workshop held last February as part of the 2018 training project in partnership with the Asfari Foundation and the Danish International Media Support (IMS).

Rozana CEO and Director of the Training Program, Lina Chawaf, stated that the two-part training, organized by Rozana, aims at providing the Syrian media institutions with a qualified and well-trained staff, which will contribute into enhancing and developing media production in general.

She added that the second part of the training program related to the Syrian interior, is a step to develop the skills of citizen journalists at home, as they have become the mainstay of media work in Syria after 2011.

Rozana Media Foundation was launched in 2013. It includes a radio broadcast on the FM in Gaziantep, Turkey, and Online. The Foundation also has a website and a studio in Paris in addition to a training centre.

nextGaziantep | Logistic services for organizations and companies provided by Rozana