Rozana Media Foundation organized a training course on “making video stories” at its headquarters in Gaziantep, Turkey, in cooperation with the Norwegian Institute of Journalism, and with the participation of a number of journalists and media activists.

The training workshop, which lasted for about four days from 28 to 31 October, aims at writing a script to produce a good and interesting video story.

About 15 trainees participated in the workshop under the supervision of two trainers from Norway and Denmark. During the training the participants presented and discussed the videos they produced, in addition to covering a number of recommendations, including the basics of making video stories.

Trainers Mais Katt and Loujain Haj Youssef concluded the training by touching on the topic of journalistic ethics, through reading into and reviewing the charter of ethics for journalists in cooperation with the Ethical Charter for Syrian Media and Syrian Journalists Association, which granted the trainees certificates of attendance.

Trainee Ahmed Al-Kanjou told Radio Rozana that this training was one of the most important workshops he attended so far, adding that the trainer gave him insight into new  data, different  from the traditional routine of the Arab media approaches.

Trainee Mohamed Ghorab confirmed that it was a new, fun and unique experience, during which he grasped new information about “making video stories.”

Rozana Foundation’s training centre had previously organized training workshops during the month of May for dozens of media activists inside Syria, under the supervision of professional journalists from several Syrian media outlets. Rozana also held a training session at its headquarters in Gaziantep last year, entitled “How to develop work culture in the media institution”, which was facilitated by Fouad Al-Alani.

Rozana Media Foundation was launched in 2013, and includes a radio station broadcasting on FM waves in Gaziantep, Turkey, and northern Syria, and on the Internet. The Foundation also has a website and two studios in Gaziantep and Paris, as well as a training centre equipped with modern technologies in Gaziantep. 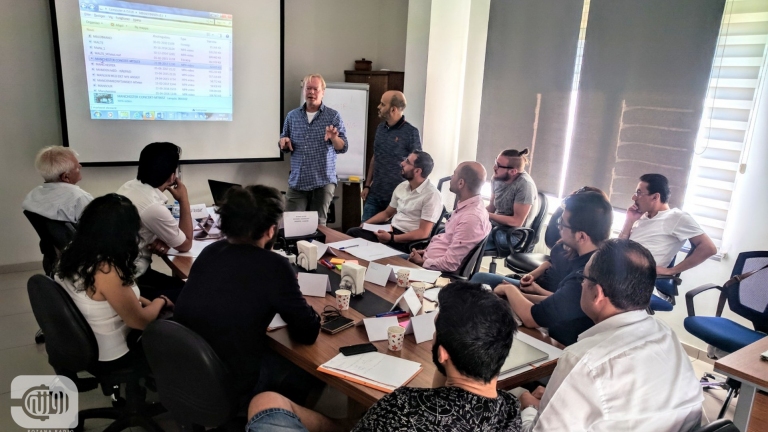 In cooperation with the Norwegian Institute of Journalism, Rozana Media Institution, organized a workshop on “Video Production and Storyboards Creation”. The 3rd and 4th of September, were two successive working days in the storyboards creation workshop at the Rozana office in Gaziantep, Turkey. This event was attended by professional Syrian journalists who have different experiences in the field of video production and the management of reporter photographer teams in several Syrian media institutions.

Syrian journalists were trained by the Danish journalist Torben Shaw, the Norwegian journalist Frudeh Rikf, with the presence of the director of the digital media department at Rozana Media Institution, Mais Katt.

In an interview with Rozana, journalist Frudeh Rikf said “the Norwegian Institute of Journalism is a center specialized in training professional journalists. We started working with Rozana Media Institution three years ago and this is the fifth training that we have planned together.” He added: “At the Norwegian Institute of Journalism we rely on professional coaches who train European journalists or journalists in the Middle East in the same way. However, we use different forms that are commensurate with the nature of each group’s work, taking into account the societal differences and the differing field press working conditions.”

The training workshop focused the creation of the press storyboard in modern ways, planning the filming, writing the scenario, selecting the appropriate and effective shots, and the most important ways of communication with the correspondents who are responsible for working on filming and dealing with the filmed raw materials.

In his commentary on the method he adopted during the workshop, Coach Torben Shaw said: “For me, storytelling  has to do with feelings. As journalists, we have to show joy and sadness and we have to learn the little tricks to attract the audience to follow our stories and to influence them.” Torben also says that this is the first time that he participated in training Syrian journalists: “All  thetrainees are highly experienced, they have previous practical experiences, which helped us to avoid  the simple basic information process. Everyone was integrated into the training and interested in the information provided … it was a unique experience for me.”

The training was attended by Syrian journalists who work as video editors at Rozana Media Institution and other Syrian institutions such as the Syrian Journalists Association, Enab Baladi newspaper, the Syrian Women’s Network, and Lamba Media Production. Amar, one of the trainees who were interviewed by Rozana, said “The training has changed  my conception about  press storyboard creation. We get very interesting subjects from reporters, but we make some mistakes in dealing with them as filmed raw materials. I have learned how to draw a filming plan in details so that the reporter would be surrounded with all the details that, in my opinion, are important to produce the required video while respecting his ideas and his own plan.”

For more than four years, Rozana Media Institution has trained dozens of Syrian journalists and citizens through workshops and trainings that have covered various media arts. It is expected that a training course will be organized to complete developing the video production skills in November.