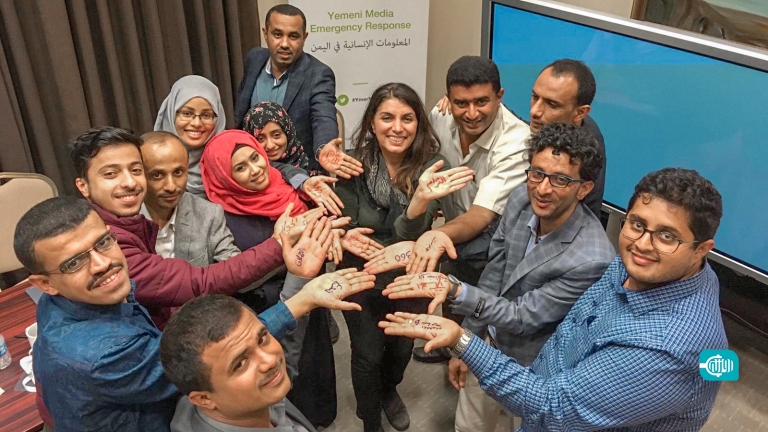 From 23 to 30 November, the Canal France International (CFI), the Media Cooperation Agency organized a training workshop for 12 journalists from Yemen at the Dead Sea.

The first session of the training workshop presented by journalist Mohammed Al-Hani was aimed at training Yemeni journalists on training skills under the title “Trainers’ Training “.

The Syrian journalist, Lina al-Chawaf, the Executive Director of the Rozana Foundation, presented the second session under the title of “Humanitarian Journalism” and how our media turned into humanitarian

media in the difficult circumstances that Yemen is currently experiencing of dismantling and also of a deplorable humanitarian situation.

The French Media Cooperation Agency said that the aim of the training is to improve the dissemination of information to the affected population in Yemen, to give more flexibility to information of a humanitarian nature and to facilitate its treatment by journalists.

CFI is a subsidiary of France Medias Monde, which promotes media development in Africa, the Arab world and Southeast Asia.

The Rozana Media Foundation established its training centre in 2014, broadcasts radio content via online digital broadcasting, as well as in Turkey via the fm frequency in Gaziantep. The Foundation also has a website and a radio studio in the French capital of Paris, as well as the Rozana application on Android and Apple.