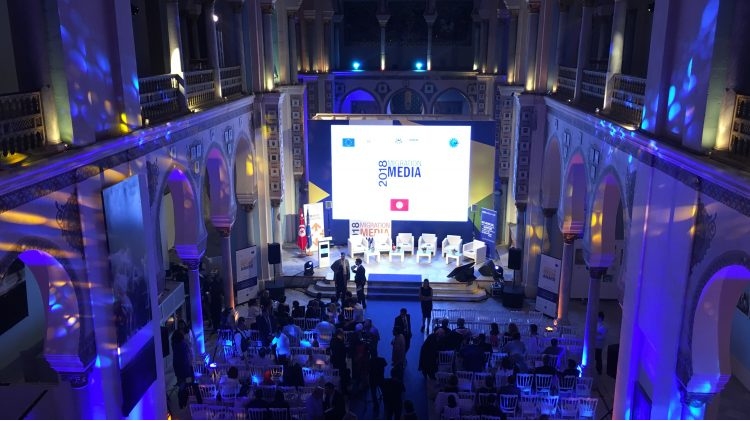 The second edition of the Migration Media Award awarded 41 journalists from 18 countries for their excellent journalistic skills in dealing with the topic of migration in the Euro-Mediterranean region. An international jury of 14 senior professional journalists assessed more than 200 applications.

The Editor-in-Chief, Loujein Haj Youssef received the award today during a ceremony held in Carthage, Tunisia, for the category of web journalism and Arabic language.

“Radio Rozana” won the competition thanks to the story Susan’s Story: Four Migrations and Announced Death written by Loujein Haj Youssef, who has been working in the media sector for more than 12 years. The award was granted to the original female author of the story, for how much courageous she was to tell details about her own life, and to Syrian women, who are the most vulnerable party in the conflict in Syria.

In the six categories of video, print, online, photo, multimedia or radio in the English, French or Arabic languages, the winning entries feature fact-based and impartial reporting on the complexity of migration, its many challenges and opportunities.

Rozana Radio received the second prize in the Media Migration Award ceremony in the “Euro-Mediterranean Region” among the nominated Arab radios for the radio program “Fox” presented by Soulafa Lababidi.

This award has been granted given the negative effects the current discourse had on migration in Europe and all over the world during the past decade. This situation calls for a review of the methods of gathering, sharing, and disseminating data among different actors. This has a major impact on migration policies and the perceptions of public opinion.

The Migration Media Award is an EU-funded journalism competition bringing together four partners based on the initiative of the International Centre for Migration Policy Development (ICMPD).

The programmes EUROMED Migration IV and OPEN Media Hub, funded by the EU, developed the scheme in partnership with the European Asylum Support Office (EASO) and Malta’s Ministry for Foreign Affairs and Trade Promotion.