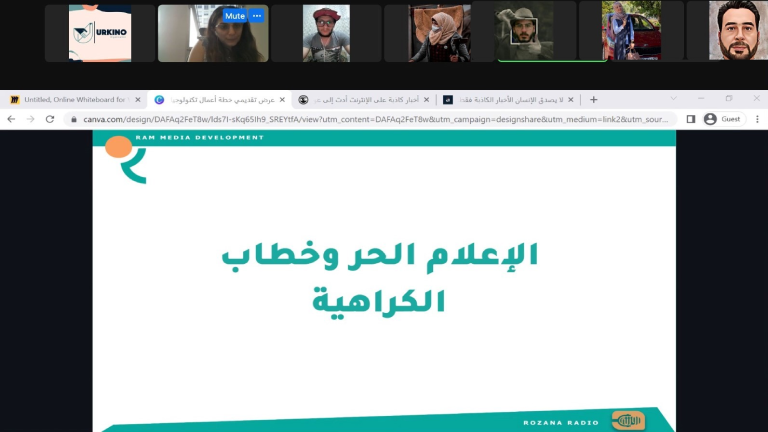 Rozana Centre for Media Development (RAM) participated in the subject of “hate speech and fake news” as part of the “media and peace building” training implemented by the URKINO Organisation.

The training lasted from the beginning of this year until the end of June. About sixty persons, who work in the field of media and journalism, participated in the training. They were divided into five groups, each one attended 15 training days (the training day lasts 3- 4 hours).

As for the training subject, in which RAM participated through a group of journalists, the communication and media officer in URKINO organisation Radwan Safar said: “This training has a particular importance since Rozana Institution has experience in combating hate speech and fake news, and the objectivity of presenting news.”

According to Safar, all the dialogues and discussions, which took place during the training, were likened to real cases that happened to Rozana’s team in the newsrooms and on social media platforms.

Regarding the participation of Rozana, the journalist and trainer at the RAM Centre Mohsen Ibrahim said: “Hate speech is significantly growing on social media platforms and in media. In this training, we tried to focus on the role of the media in reducing hate speech.”

The training addressed methods and tools for verifying fake news, and the need for a diverse and pluralistic media to represent all categories of society, especially marginalised groups, according to Ibrahim.

The other two subjects of the training focused on:

The subject of “hate speech and fake news” discussed points most notably:

The team of “URKINO”, an ancient Syriac word that means the land or place of justice, is an emerging independent non-governmental organisation, it believes that each individual has the responsibility to work to achieve a more cohesive and aware society, in which all individuals enjoy equal rights, and works in partnership method with societies to achieve justice and build peace.

Through its professional trainers, the Rozana Centre for Media Development RAM provides training services to both institutions and individuals. It provides its services to journalists and Syrian and Arab institutions in North Africa, Yemen, and Iraq, in cooperation with leading Arab and international organisations that support free media in the Arab world.

previousWhat do you know about the podcast and is it an extension to radio?

nextSolutions journalism, definition and elements of its success in solving social problems