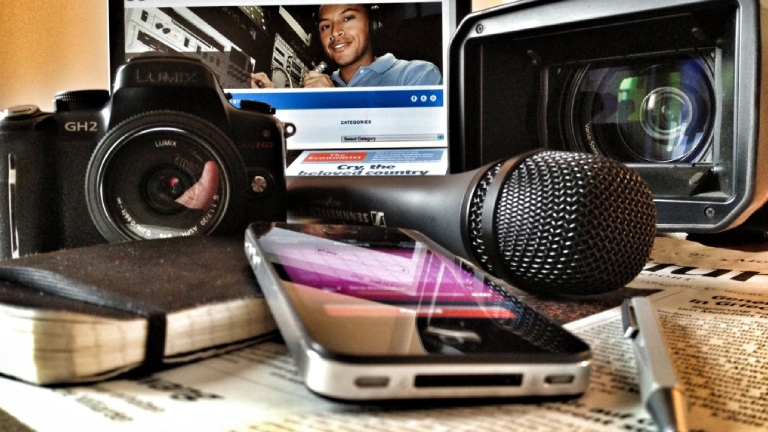 The Rozana Media Development Center (RAM) participated in training journalists from the Middle East and North Africa to hone their skills in digital journalism, the most important of which are methods of information verification, storytelling tools, digital security for journalists, methods of public engagement and other topics that contribute to the development of journalistic work.

This training program was held in cooperation with the International Centre for Journalists (ICFJ) and its Social Media Solutions Program. The ICFJ and the Facebook Journalism Project launched a series of training webinars in Arabic on video and mobile journalism over a period of six weeks, from 12 November to December 2020.

After the first webinar held on 12 November as part of the ICFJ training sessions, initiated by the trainer at the Rozana Media Development Center (RMD) Journalist Mais Katt, who provided guidelines and instructions for journalists on how to use mobile phones in the production of journalistic content, the ICFJ organised on Thursday the second webinar, which lasted for two hours on 19 November and witnessed the  participation of 370 male and female journalists from the Middle East and North Africa.

During the second webinar, Egyptian journalist Mustafa Darwish detailed the advantages of using mobile phone in news reporting, including the low cost of equipment compared to expensive professional cameras and the expenses of hiring a camera crew, in addition to the quality of  mobile phones’ cameras, the convenience of filming and moving to different locations, which also helps protect the journalist, in addition to the quick access to live broadcasting and sending materials via smartphones.

In the fourth session, Mustafa Darwish provided practical advice on mobile journalism and information on the tools used to produce news reports using the mobile phone, while stressing the importance of paying attention to the sound quality when preparing reports using a mobile phone and recommended using an external microphone to record the audio.

The fifth session, facilitated by journalist Sarah Hoteit on 16 December, was attended by 295 journalists from all over the world, during which she spoke about the process of producing and editing videos using mobile phones.

The sixth and final session, entitled Social Media Platforms Solutions, was held on Thursday 17 December with the participation of 269 journalists and activists around the globe.

The training was delivered by journalist and media expert Sarah Hoteit, who started by talking about the importance of live broadcasting, pointing out that the Covid 19 pandemic crisis has led to a significant increase in the use of live broadcasts.

Hoteit also noted that the importance and attractiveness of live broadcasting emanate from its “immediate and instantaneous” aspects, as there is a growing interest in knowing what is happening during a particular moment, in addition to the fact that the spontaneity of live broadcasting is one of the factors that attract the public.

Hoteit added that interacting with the audience during these live videos increases its popularity and creates a bond between the person appearing in the video and the audience, explaining that planning the broadcast is very important, despite the fact that spontaneity is one of its defining features.

These training sessions are held remotely, as an extension of the training of journalists in the Middle East and North Africa within the “Social Media Platforms Solutions” program, which was launched in partnership with the Facebook Journalism Project and in cooperation with the Global Health Crisis Reporting Forum held by the International Center for Journalists (ICFJ) and the International Journalists’ Network (IJNet).